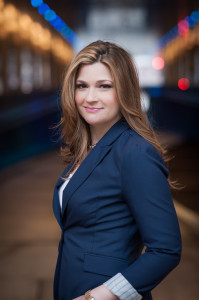 Chloe is a contemporary romance novelist living in Pittsburgh, Pennsylvania with her husband and their sweet puppy. Chloe has always loved writing and cherishes the opportunity to craft her fictional novels and share them with the world.

When Chloe isn’t writing, she spends her time exploring Pittsburgh with her husband and friends. She also enjoys yoga, jogging, and all Pittsburgh sports. She is an avid reader and wrote her debut novel Three Rivers in her spare time. She loves to research every last detail relating to her books. For example, in an effort to bring authenticity to Three River’s treatment of grief and loss, she consulted with a psychologist and grief counselor during its preparation.

1) What has been your worst haircut/style?
I have crazy thick hair and lots of it (I mean, we’re talking use-a-quart-of-conditioner-without-blinking amount of hair). It really only works as a super short or really long. In high school I chopped it off in this cute edgy pixie I loved! Then I spent a semester of my senior year in high school in China and couldn’t get it cut right. It grew out like some sort of bizarre mullet version of the three stooges hair. I have pretty exclusively just done long hair ever since.

4) If you could learn any language fluently what would it be?
French. Studying Chinese and living there twice was great, but I love France and wish I could speak more than just the basics I know.

5) What is your favorite board game?
I love Clue! I so want to do a grown up Clue dinner party where people have to dress up like the characters. I want to dress up as Miss Scarlet. She has the best outfit and what woman doesn’t want to be a femme fatale for a night?

6) What is your favorite movie?
Lady and the Tramp. I named our springer spaniel Lady, now I just need to rescue Tramp! Second place is The Thin Man.

7) Which song do you hate the most?
Tied between Celebration and YMCA. For our wedding I put those on the DO NOT PLAY list. I think some guests wanted to rebel against my tyrannical refusal to abide by wedding music protocol, but, damn, those are awful!

8) Who is your celebrity crush?
I have been in love with Ewan McGregor since I was 15. I swear my husband looks like him. He tells me he doesn’t see it. Good thing, mine is the opinion that matters on that issue.

9) Can you do 10 revolutions of a hula hoop?
Oh dear Lord, no. I can barely do one, and its not a sight anyone wants to see. I am beyond uncoordinated. My friends, family and husband lovingly refer to me as “The Spaz.”

10) What’s the worst pick up line ever used on you?
I was a waitress at the main hangout restaurant my senior year at Duke. We had “big beer night” on Thursdays. It was great for tips but terrible for pick up lines. One guy said to me 4 times: “I’ll have a beer . . . and your number.” He would have asked more times I think, but he couldn’t handle any more big beers after that.